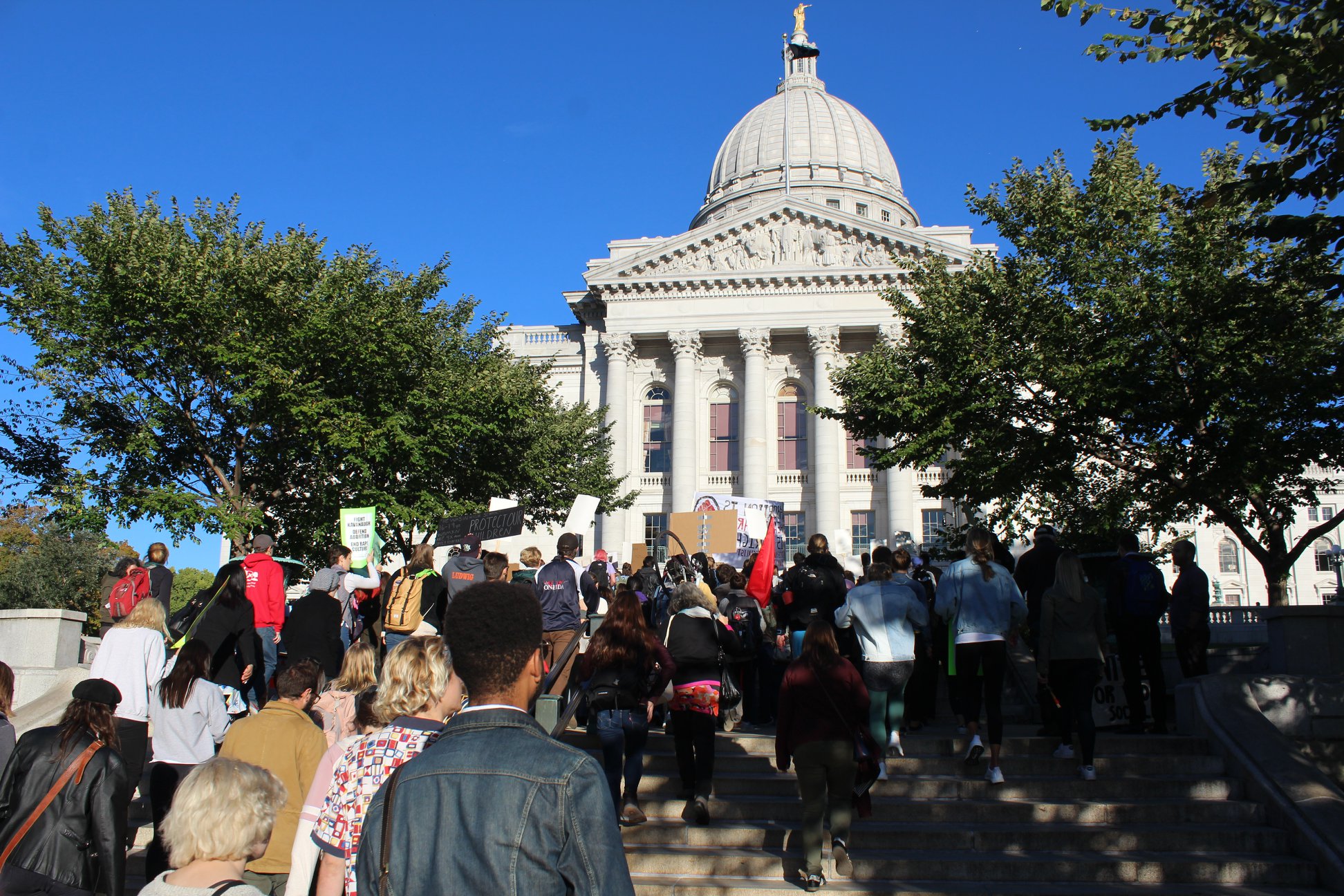 The COVID-19 crisis entered a new chapter in the last two weeks with the emergence of a right-wing protest movement to end state shutdowns and reopen the economy. Republicans have already been arguing for weeks that saving lives is not worth the damage prolonged shutdowns will do to the economy. But now this ghoulish math is bolstered by boots on the ground activity, including throughout the Midwest.

On April 15, in Lansing, Michigan, protestors gathered for “operation gridlock” to protest Governor Gretchen Whitmer’s Stay at Home order for the state of Michigan. On the same day in Wisconsin, a dozen or so people defied the rules closing state parks to protest, comparing Wisconsin’s shut down to Nazi Germany. On Saturday, April 18, hundreds of protesters gathered in Wisconsin, Ohio, Maryland, and Texas, demanding an end to the stay at home orders.

More protests have been scheduled for the week ahead. In Wisconsin, far right organizers have planned a protest for Friday, April 24 to demand that the governor end the Stay-At-Home order. Over 3,000 people have already indicated that they will attend, with 12,000 more marking themselves as interested on Facebook. If even 10% of these people show up at the State Capitol on April 24, it will be the largest right-wing gathering Madison has seen in years, giving an audience of thousands to marginal right-wing figures who were previously unable to muster even dozens.

Socialists in the Midwest and throughout the country must have an understanding and analysis of these protests, and even more importantly, we must respond with demands of our own that don’t involve unleashing a pandemic to decimate our communities.

We must understand why these protests are happening and how the right is able to get a massive hearing and huge turnouts in this moment. First and foremost, the call to reopen the economy comes from capital itself, through the mouths of not only Trump and other Republicans, but Joe Biden as well. COVID-19 and prolonged shutdowns have been very bad for business, and the bosses and owners want us back at our posts to begin churning out profits again. These protests are an escalation of that same drum beat, not an expression of the working class and oppressed. The only freedom they’re really discussing is the freedom to continue using our lives as fodder for profits, even during a pandemic.

These protests are also being attended and organized by virulent racists and members of the far right. Brookfield, Wisconsin is a suburb of Milwaukee, where over a hundred people—most of them African American—have already died of COVID-19. It’s not that white protesters in Brookfield don’t know that COVID-19 is a serious disease that is having an outsized impact on African Americans in a neighboring community. They know and they do not care. Similarly, it was within days of learning that African Americans comprised over 80% of COVID-19 deaths in Milwaukee that the Republican Party of Wisconsin led its final charge to insist on in-person voting for Wisconsin’s primary election. With the far right involved, we can’t assume any sympathetic intentions. The elimination of people of color from our society is not tangential to their project, but a desirable outcome.

Without being sympathetic to or tolerant of protests that further endanger all of our lives, what should concern socialists is the large audience that currently exists for the vile right wing at the heart of these protests—the people who could help the protests leap from hundreds to thousands in the next week. As a result of state shutdowns, some families have lost every stream of income overnight and have so far received very little relief from the state, including many self-employed workers and small business owners. Evictions have been temporarily suspended, but rents are still due and piling up as the weeks go by. Power companies can’t disconnect families for non-payment right now, but those bills, too, are stacking up. Internet access is a must for families with school-age children who are now expected to participate in remote e-learning, but logging on isn’t exactly free either. The fact of the matter is that some people are paying a much higher price to protect public health than others at this moment.

Importantly, some of them are paying that price from counties that have hardly been touched by COVID-19. For example, in over half of Wisconsin counties the number of confirmed cases of COVID-19 is still in the single digits and there have been no COVID-19 deaths. Inadequate testing means that the real numbers are probably higher everywhere and of course the very reason that numbers have stayed low throughout the state is because of our governor’s Safer At Home order. But we can imagine that there are people whose lives have been completely upended who don’t know anyone who has tested positive for COVID-19, much less anyone who has died from it. In their lives there is only one crisis at present: how to pay for groceries now and keep from becoming homeless the second this crisis is over. For individuals and families in this position, there appear to be just two choices: end the shutdown to get back to work or stay trapped at home and go broke.

The very urgent problem is that the false dichotomy between opening up the economy or staying home and going broke has not yet been demolished by arguments for a different way, primarily because the Democrats in leadership throughout the country are both incapable of and unwilling to take that path. Socialists must step into the void to undercut the messages coming from the right, fight to protect the working class from COVID-19, and win relief from the financial disaster bearing down on so many.

First, we have to hold the line that we will not return to our jobs at non-essential businesses until it is safe to do so. For our lives and the lives of front-line workers at hospitals and grocery stores, the economy must remain closed. As this crisis continues, the pressure to go back to work will only increase and we have to be ready to resist it.

But how will we know when it’s safe? We can’t trust our employers to make that determination. Similarly, state governments and state health departments are under tremendous pressure to give businesses good news. Over time, they will bend in the same way that the CDC has caved on previously held guidelines under pressure from Trump. We need trusted doctors, nurses, scientists, public health and workplace safety experts on the left to help workers and activists understand what conditions would need to be met before it would be truly safe to go back to work and resume public life.

But keeping the shutdowns going by itself is not enough. People are living on the edge of a knife right now and they need relief. We should be making and organizing around demands like the following, preferably in well-publicized statements in which we also denounce the protests and calls for a return to work.

All of these things would make staying at home for another month (or several more more months) a reasonable proposition for working families. Socialists must also participate in and be responsive to struggles by front-line workers for safe working conditions, PPE, hazard pay, and guaranteed paid leave should they become sick. We must lead the charge against employers and landlords who are taking advantage of these crisis conditions to further exploit their workers or tenants. The status quo is not acceptable. Working class people cannot be forced to bear all the losses caused by this pandemic.

No Going Back to Normal

Someday, it will be safe to return to public life and go back to work. But another thing socialists must be clear about as we organize to defend ourselves and our communities throughout this crisis is that we cannot go back to the way things were before. It is our job to expose all the ways in which capitalism contributed to this crisis in the first place.

For decades, businesses and their lackeys in the Republican and Democratic parties throughout the Midwest have attacked unions and fought wage increases for working people. So instead of having funds saved up for a rainy day when COVID-19 came to the US, most Americans were already in debt.

The practice of underfunding public schools in favor of privatization schemes means that instead of having the staff and the resources to successfully pivot to remote learning during the pandemic, public schools saddled already over-taxed teachers with this outsized burden. Families without internet access or computers and tablets for all their school-aged children struggle to prevent their kids from falling behind.

Laws passed by slumlord legislators have empowered landlords and hurt tenants, making it difficult to institute moratoriums on rents and evictions in cities that need it most.

Prolonged quarantine itself was never inevitable. People throughout the United States are now staring down months of Stay-At-Home orders and waves of COVID-19 outbreaks because of the extremely limited capacity of our underfunded healthcare system and a depleted public health infrastructure that has proven entirely incapable of tracking the spread of COVID-19. If we had implemented robust testing and contact tracing months ago, we might not be living as we are today. Further, if we started large-scale testing now, it might even be possible to lift restrictions in more remote communities where COVID-19 has not yet reached community spread. Instead, we all have to live like we’re already infected specifically because we do not have enough tests to know for sure. This outcome was not inevitable—it was a direct result of political decision making that prioritizes private profit over ensuring that our public institutions have the resources they need to function during a crisis.

We cannot and should not go on like this. Like this pandemic, the era of profit above all else must be brought to an end. 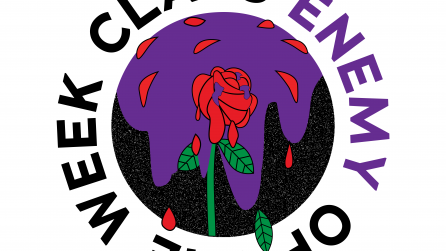 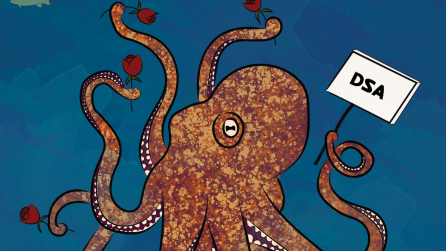 Mass Organizations and NGOs in a Socialist Movement 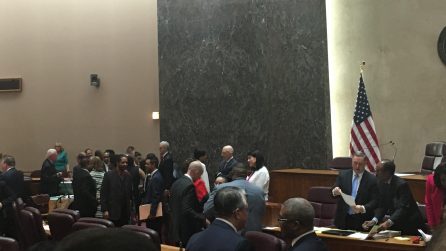